skip to main | skip to sidebar

My roommate Mike (Taiiga) just had his album Hiveminds released on the swedish label Wang Electronics which I did the album art for. I finished this a while ago but held back on posting it since the website it was released on was having some technical trouble. anyway, now you should be able to go here and download it which you should since its free and awesome. a must have for any fan of gameboy music or radical politics. If there is still trouble I can always email you a zipfile of the album myself. 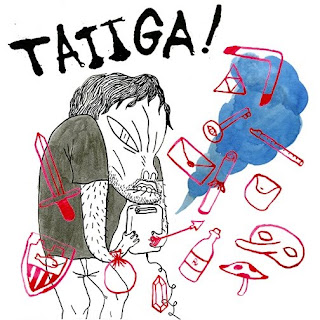 It's come a long way since that first sketch. I'm really happy with how this turned out. but don't let this drawing affect your opinion of Mike, he is neither as angry or as ugly as I have portrayed him. the beard and arms is pretty accurate though. I tried to do a bunch of classic RPG items that weren't specific to any RPG, but I still ended up putting a Rupee and a Triforce in the group. 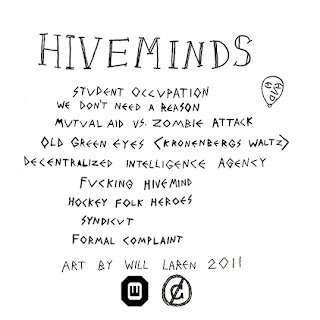 I am not a graphic designer. this is the best back cover I could do, even with Mike's photoshop help. the song "Kronenberg's Waltz" is named after a mutual friend who tells spooky local ghost stories about Chattanooga
Posted by Will Laren at 6:54 PM

Will Laren
I'm a comic artist/zine maker/illustrator based in philadelphia. MY TUMBLR BUY MY ARTWORK AND ZINES